The Best Case Scenario For Bitcoin


When I first learned about bitcoin in 2015-ish it made my head hurt.

It didn’t make sense and there was no one in the space with the ability to explain it in a way that made sense.

It didn’t help that by the time the 2017 bubble ramped up the charlatans and snake oil salesmen (and they were all men) descended on cryptocurrencies faster than your relatives when the pies come out after Thanksgiving dinner.

There were ridiculous price targets being thrown around. Bitcoin was going to put the dollar and the Fed out of business. The blockchain was going to end world hunger.

The blockchain hasn’t found a cure for cancer just yet but it shouldn’t come as a surprise that expectations got out of whack with reality because this almost always happens when a new technology is introduced.

The same thing happened with the introduction of monetary policy in the 1700s, railroads in the 1800s, the financialization of assets in the 1920s and the Internet boom in the late-1990s.

New and exciting technologies always have and always will cause periods of euphoria. We cannot help ourselves from getting carried away.

But the speed with which the bitcoin bubble ramped up in late-2017 was a sight to behold because we’ve never seen anything like that occur in the information age.

I never quite wrapped my head around everything that was happening in the crypto space in 2017 but I’ve studied bubbles and human nature and could see what was coming. So I opened up a Coinbase account late in the summer of 2017 and put some money into Bitcoin and Ethereum.

I held both for the insane ramp up in November and December of that year and continued to hold as bitcoin proceeded to crash more than 80% in the aftermath of that bubble.

I told myself this was a buy and hold forever type of purchase and it’s only 1% or so of my portfolio. Since that time I’ve dollar cost averaged small amounts periodically into bitcoin.

My thesis for investing in crypto has changed over time just like the narrative from crypto enthusiasts has shifted.

I don’t view it as something that’s going to forever change the world but it is possible crypto could act as a truly decentralized store of value that allows for some more efficient forms of traditional finance (borrowing, lending, earning interest, payment transfers,  etc.).

Some people may scoff at the notion that something as volatile as bitcoin could act as a store of value. Not only did it fall 80% after the 2017 insanity but the price dropped like a rock on Thanksgiving after an enormous rise in just a few short weeks.

Crypto being so volatile makes sense though when you consider something like gold has been used as a store of value for thousands of years. Bitcoin has only been around since Lehman Brothers went under. It’s bound to go through fits and starts whether it works out or not.

And perhaps the best use case is for people in developing nations who don’t have the same financial infrastructure and stable currency we do.

That’s one of the biggest bull cases I can think of, giving the under-banked an ability to transact in a timely and cost-effective manner using a secure store of value with few traditional requirements.

It’s possible bitcoin and the blockchain could make certain transactions easier. But it’s also possible digital gold is the best-case scenario for crypto.1

And if bitcoin’s destiny is to become the Millennial/Gen-Z gold, the younger generation should get used to the fact that “stores of value” can and will experience massive drawdowns from time-to-time.

Crypto drawdowns just may play out over much shorter timespans.

Gold was down more than 70% following a huge run-up in prices during the 1970s:

It was underwater for almost 30 years from the early 1980s until just before the 2008 financial crisis.

Bitcoin’s more than 80% crash, by comparison, has lasted just four years so far and it almost took out the highs before the Thanksgiving massacre: 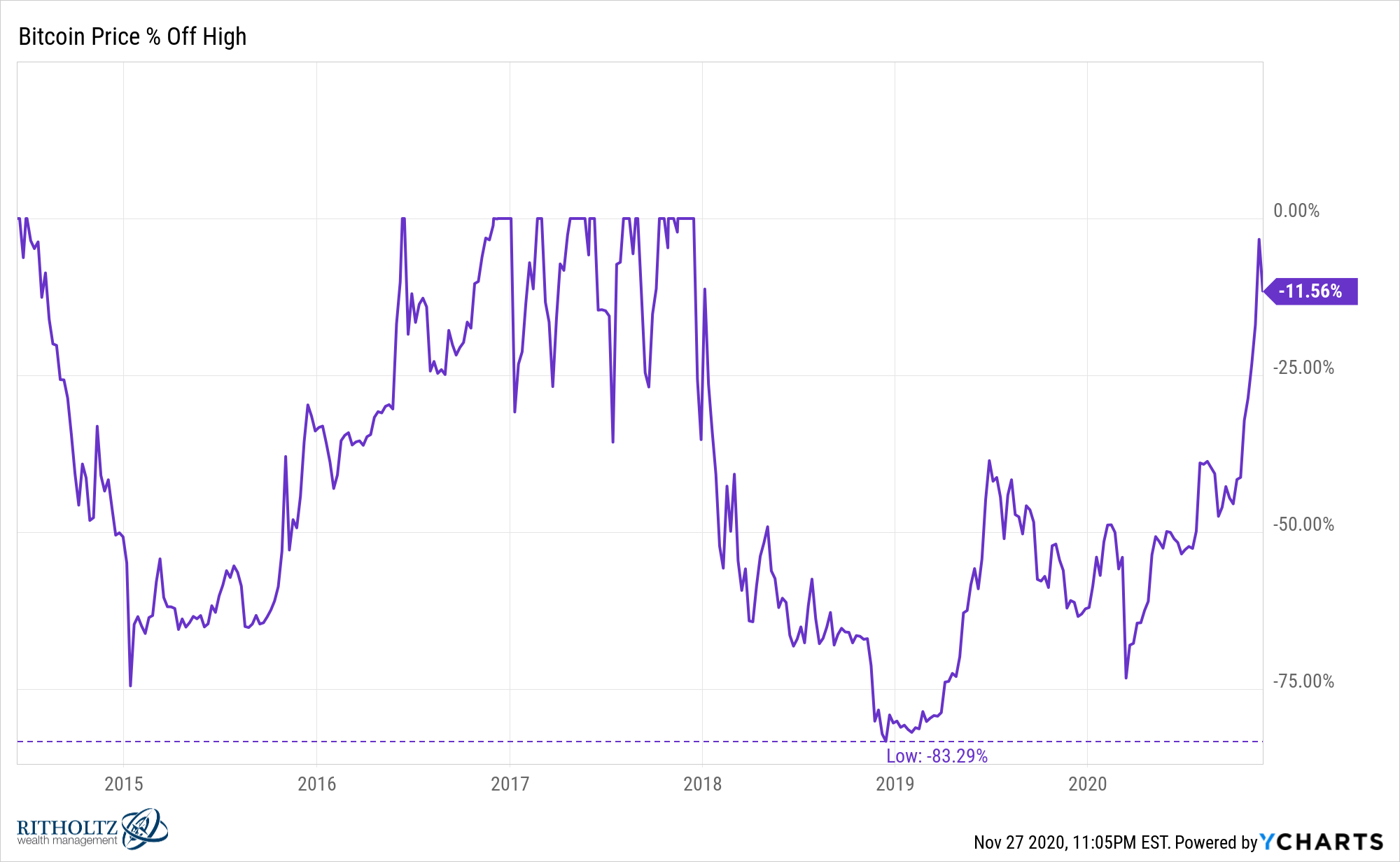 I have no idea what will happen with bitcoin or cryptocurrencies in general in the years ahead.

Anyone who thinks they know with certainty how this all plays out is delusional.

But I can say that my stance on crypto has evolved over the years to the point where I think the best-case scenario just might be the new digital gold.

You may have missed it because of the holidays, but be sure to check out my podcast with BlockFi CEO Zac Prince: Talk Your Book: Investing in Bitcoin. This was one of the most level-headed conversations I’ve had with someone deeply involved in this space.

Michael and I discussed the bitcoin bull market and how this is different than 2017 on this week’s Animal Spirit video:

Make sure to subscribe to The Compound to see these videos each week.

1Option three would, of course, be somewhere in the middle where it doesn’t do either and just sort of languishes and never reaches its full potential.

For Better of For Worse, This is a Young Person’s Market Right Now

How Technology Ate The Stock Market

For Better of For Worse, This is a Young Person’s Market Right Now

The Gamestop story is endlessly fascinating for a number of reasons. There are elements of a mania in the daily price moves. It shows certain...

How Technology Ate The Stock Market

In 2011, venture capitalist Marc Andreessen wrote one of the more prescient pieces of this century, called Why Software Is Eating the World. He laid out his...

Things feel pretty comfortable in the stock market right now. Pretty much anything you put your money into has worked spectacularly well since stocks bottomed...

Getting Your Stock Picks From Podcasts

The majority of my portfolio is rules-based because I prefer convenience, automation and taking my emotions out of my investment process. There are still decisions...

Winter Wellness Tips for Your Family

How Benchmarking Impacts Your Decisions